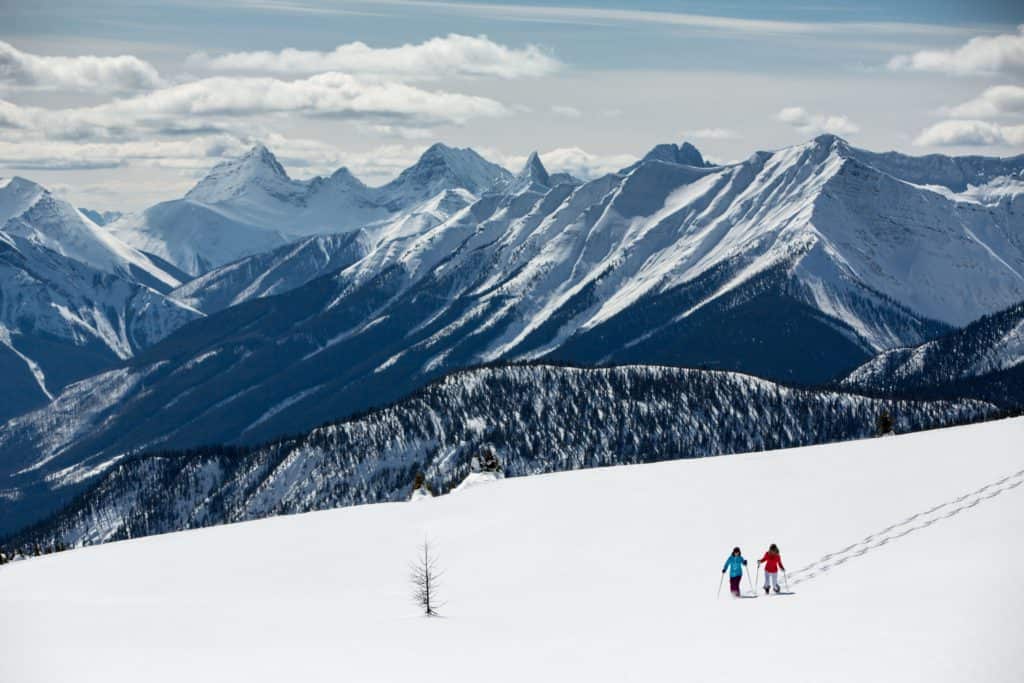 Home > Blog > Everything You Need to Know About Sunshine Village

Everything You Need to Know About Sunshine Village

High in the heart of Banff National Park, a mere 15-minute drive from the mountain town of Banff, sits Sunshine Village – one of the snowiest resorts in Canada. Sunshine can also boast the longest non-glacial ski season in Canada – one that begins in early November and only ends in late May. The resort can thank an average snowfall of 9 metres for this and its altitude of 2,730m, which ensures the snow, stays light and dry.

Well and truly above the treeline, the dizzying heights of Sunshine’s peaks also enable some of the best views offered in the world of skiing – excluding maybe powder face-shots. Named amongst the top ten off-piste runs in the world, Sunshine’s run ‘Delirum Dive’ can similarly covet the title of “Best View from the Best Off-Piste Run” as according to Ski Canada magazine. These runs are also located on the spine of the continental divide, meaning you can ski both the province of Alberta and British Columbia in a single run.

With over 1000 metres of vertical, Sunshine is the place to go out of Banff’s ‘Big 3’ if you consider yourself to be an advanced skier. Of course it has more than enough green and blue trails to suit any level of skier, but its black and double black runs are among the most extreme in North America. There’s even a lift-serviced section within the vast swathe of resort that you cannot enter without having an avalanche transceiver and other related safety gear.

Sunshine’s 3,300 acres of skiable terrain also makes room for the sprawling 12 acre Rogers Terrain Park. Despite being so vast, the lifts are quick and comfortable enough to make short work of the aforementioned vertical. Sunshine was the first Canadian resort and one of the first globally, to install a heated enclosed bubble chair. In this and in its craggy mountain peaks it bears many similarities to the big name resorts of Europe. What it doesn’t have is the crowds.

That said, on powder days or fine bluebirds, there can be a considerable wait for the gondola that transports guests from the car park to the ski lifts (about 20 minutes) so it’s important to factor this in, if under time pressures from ski lessons etc.

Sunshine is located in Banff National Park, Alberta, and as a result, has seen us pen more than a few articles on whether it is the most beautiful place in the world to ski (along with Banff’s other Big3).

There exists a shuttle bus service to take you the 20-minute drive between Banff and Sunshine Village, or one might also drive themselves but be wary that the car park can fill up on aforementioned pow and bluebird days. Getting to Banff itself is also fairly easy, as it’s located about 1.5 hours drive away from Calgary International Airport. From there you might either catch one of the many airport shuttles or rent your own vehicle for the time.

Whilst many skiers and boarders will situate themselves in Banff and make the short trip up to Sunshine, there does exist some on-mountain accommodation. Sunshine Mountain Lodge, is a uniquely Canadian boutique hotel, nestled within majestic peaks of Banff National Park and being Banff’s only ski-in ski-out hotel, means you’ll be ahead of the pack.

Alternatively, look to stay in Banff and indulge in the energy and entertainment of the vibrant tourist town.

As most guests stay in Banff and not up in Sunshine, there are fewer restaurants and less of an après scene than elsewhere. However, down at the base of the gondola in Creekside Lodge one can entertain the notion of all-day breakfasts to delicious thin-crust pizzas to après happy hour drinks, and live music all season long. Nearby First Tracks Café can provide something to go, in fresh baked pastries, panini’s and salads.  There also exists some seven restaurants in Sunshine village from which to choose, meaning if you felt like dining somewhere new everyday that’s well within your power.

You don’t need to be a skier or snowboarder to take in the out-of-this-world views that Banff Sunshine has to offer. Grab a sightseeing ticket and make your way to the Angel Express or Standish chairs. Both lifts will take you to new heights. Enjoy total immersion into the Canadian Rockies and 360-degree views. You can also enjoy a scenic snowshoe adventure through Sunshine Meadows. If you really fancy getting of snow then you’ll be pleased to hear about the spa and massage services on offer at Verde Day spa.

We hope you have enjoyed our Sunshine Village guide, if you are interested in finding out more information or would like a quote, click through below: