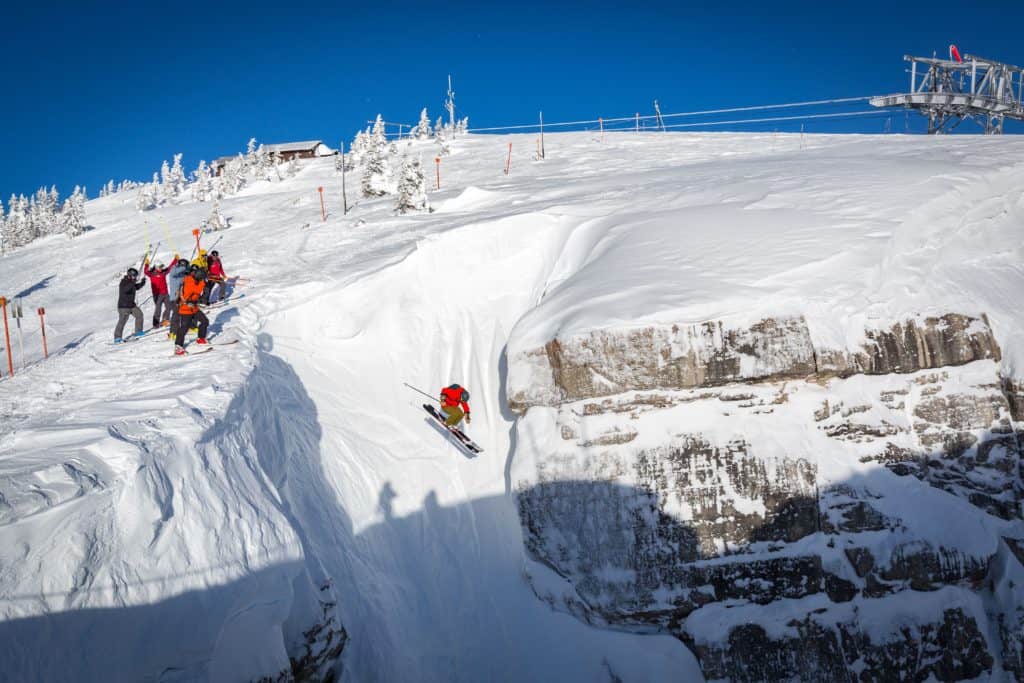 Home > Blog > Jackson Hole – Is This The Best Ski Resort in North America?

Jackson Hole – Is This The Best Ski Resort in North America?

Located in Wyoming near the Grand Teton and Yellowstone National Parks, Jackson Hole is a spectacular part of the world. It has a reputation for serious terrain, dry snow, core local skiers and boarders, amazing views and a fun, cowboy atmosphere. After my first trip there last winter, Jackson more than lived up to that reputation, but with a few surprises as well. I learnt that Jackson Hole not only delivers a true big mountain skiing experience, both in resort and the gate-accessed back country, but the variety of terrain means it also has something for everyone, from kids and first timers, to intermediates who like long, mellow groomers.

This 2016-17 winter turned out to be one of Jackson’s deepest snow years ever: the cumulative snowfall when lifts closed on April 9 sitting at a massive 15 metres (593ins). When we arrived in late January it had been four days since the last snowfall, but the snow quality was excellent – not surprising given the very cold temps (it was -15) and Jackson’s altitude. (The base is 1924m and the summit is 3185m.)

The season of 2016/2017 saw Jackson Hole’s cumulative snowfall climb to 15 metres. Which meant consecutive-pow days weren’t a rare occasion, which equalled a whole lot of this. Image:: Harro

The resort is located at Teton Village, an easy 20-minute drive from the town of Jackson. There is plenty of choice for accommodation, whether on mountain, in Jackson itself or halfway between the two at the Aspens or Wilson, a town at the foot of the Teton Pass.

Obviously staying slope-side in Teton Village is convenient and the accommodation ranges from the value-type at The Continuum to on-snow hotels and luxurious free-standing homes. The village is also well-served by a variety of shops, bars and restaurants. However, there are also plenty of accommodation options in town, from where there are regular buses to the resort (3$ per person,) so commuting is easy. Town also has a lot to offer with a large retail precinct, great restaurants and some classic bars – like the Million Dollar Cowboy Bar – just one of those places where you need to take a photo.

For families there are plenty of things for the kids to do off snow, including Ice skating in the town square, Elk Sleigh rides and wild life viewing. It’s also worth checking out the snow tubing and the new coaster at Snow King resort which is the local mountain right in town.

“After some serious investment over the past decade, Jackson now has one of the most sophisticated and efficient lift systems in the US.”

While skiing Jackson is all about the mountain, it is not just the terrain that is impressive. Unlike most other major US resorts, Jackson is not corporate owned, but is a private operation owned by the Kemmerer family and you can tell they care about their mountain. After some serious investment over the past decade, Jackson now has one of the most sophisticated and efficient lift systems in the US.

This winter the new Sweetwater Gondola opened, replacing two chairlifts, which not only increases the capacity to move people out of the base area but gives fast and comfortable access to expanded intermediate terrain. The gondola’s Solitude mid-station also services a beginners and kids ski school facility and a large area of perfectly groomed blue and green runs. Future plans are for a kids ski school centre that will include a day lodge, cafeteria and rental area.

We had a couple of days of clear weather when we arrived which gave us an opportunity to explore the mountain and get a feeling for the terrain. We were also lucky to have a guide, with Hotham freeride coach Cohen Bennie-Faull showing us around the mountain. Cohen has spent the past three winters skiing and filming in Jackson and knows the place well. He also rips, and when the kids were bored skiing with their parents, Cohen took them into some of Jackson’s steeper terrain to liven things up.

After two days of fine weather another storm moved in, dropping 30cms overnight, the snow so light you could blow it off the car. Fortunately for us Australian photographer Tony Harrington who was spending the winter in Jackson and he had arranged for us to jump on an early tram. This meant we were in for first tracks. Harro has been shooting with Jackson-based film production company Teton Gravity research (TGR) for 20 years and has been coming to Jackson for the past 25 winters. To say he’s well connected is an understatement.

We were also joined that day by TGR founder Todd Jones and his 10-year-old son Kai, who hit it off immediately with my 10-year-old son Joey. After Todd led Kai and Joey into the infamous Corbet’s Couloir (I watched from the side), we dropped into some amazing snow in the trees, knee deep and light with a series of roll overs and fun drops. It was one of those mornings that you know is going to stay with you for a long time, but the best thing was the day was only just starting. I knew we were in for something special.

While Jackson Hole’s inbounds terrain is incredible, the lure of its backcountry has been calling skiers and boarders for decades. Getting into the backcountry is something any advanced skier/boarder needs to do when visiting Jackson, but only with an experienced guide who knows the place well.

Fortunately for us, Harro and Todd know the area better than most and have a lot of backcountry experience, not only in Jackson, but Alaska and the European Alps. We were all equipped with avalanche packs, transceivers and beacons but the boys took the time to pass on some of their knowledge and understanding of the snow pack, how slides happen and what you need to be aware of when skiing outside of the resort.

You don’t need to be a cliff jumping expert out here and the terrain is fun – you just need to be aware of where you are skiing. It turned out this day was the first of five powder days we’d enjoy in Jackson and after that I’d have to agree Jackson is rightfully regarded as one of the world’s leading resorts. It truly is awesome. I may have ticked Jackson Hole off my bucket list, but I know we’ll be back.

There are plenty of options in with the Mangy Moose in Teton Village offering good “pub food” and live music at apres after 9 pm on weekends. The Q Roadhouse and Brewery is a must-visit with well-priced “comfort food and a vast array of craft beers brewed on premises. Make sure you pull up a saddle at the Million Dollar Cowboy Bar.

If you like the sound of Jackson Hole and want to visit it yourself then click here to see our latest packages or here to make an enquiry for a quote.