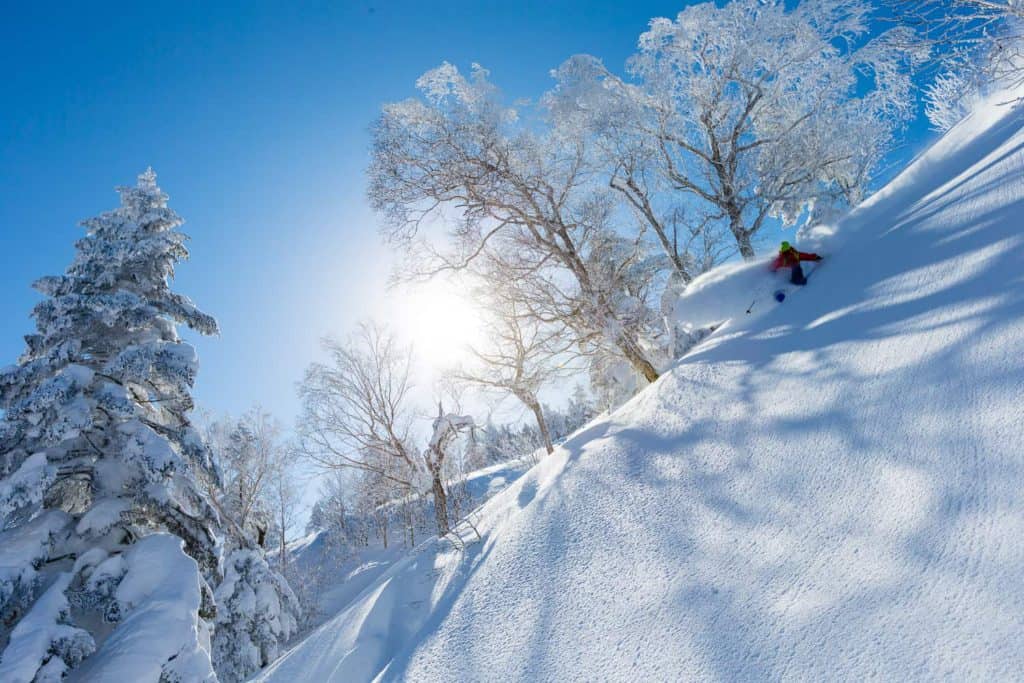 The Complete Guide To Shiga Kogen

Legend has it Japan has seen some 500 ski resorts grace its many hills at some point in time (predominantly the 1980’s and 90’s). Many have fallen by the wayside, but many more have combined into bigger and better resorts.

Indeed, the Japanese have established a healthy precedent for combining good things into better things. Think, bento boxes, heated toilets and that episode of Power Rangers where each ranger’s robot takes the form of a body part and they combine to form a ‘mega ranger’…

Maybe this metaphor has gone too far, however, this is exactly what happened up at Shiga Kogen, when the 18 individual resorts combined to form what was at the time, the largest ski resort in all of Japan.*

*Whilst just recently unseated by Hakuba, a distinction can be made in that unlike Hakuba, one can physically ski between all the Shiga ‘resorts’ meaning it’s truly interconnected. Doing so in a single day certainly would be an achievement though… 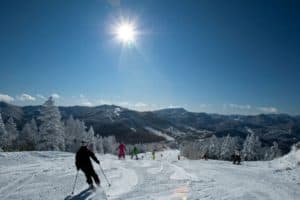 The Shiga Kogen Yakebitaiyama Ski Area (one of the best zones in Shiga) itself seems pretty big, that is until you look at it in the context of the entire Shiga Resort – indeed, it makes up perhaps 1/8th of Shiga and can be seen in the top left corner of the trail map above.

As per above, Shiga Kogen now lets skiers and boarders ski 607 hectares of equally playful and powdery Japanese terrain and access nearly 1km of vertical and 83km worth of manicured piste via 52 lifts, all on a single pass. It’s a pretty good deal. And it’s the reason Shiga is establishing itself as one of the foremost resorts of the alleged 500 in Japan. But Shiga remains perhaps the least westernised of the more ‘known’ Japanese resorts – i.e. Niseko, Hakuba and to a lesser extent Nozawa Onsen and Furano. Attracting arguably more Japanese skiers and boarders than it does international riders, and given how expansive it is, many areas of the interconnected resort can be extremely quiet (particularly on weekdays) and powder runs to oneself are not unusual.

Despite gaining international notoriety as an Olympic venue when it hosted various events at the 1998 Nagano Winter Olympics, such as women’s downhill, slalom, super G and some snowboarding, Shiga is ideally suited to beginners and intermediates, and less-so for those who favour ‘steep’ over ‘deep’.

As around 50% of the resort’s 176 runs are rated ‘easy’ for beginners or intermediates, such a claim is not unfounded. However, given how big the Shiga collective is, with 20% of terrain suited to advanced skiers, there’s still plenty to choose from. Additionally, much of Shiga Kogen’s backcountry remains off limits, a relic of what has always been tradition in Japan until resorts like Niseko flipped the off-piste and sidecountry conversation on its head through their use of gates– it’s only a matter of time until more Japanese resorts get on board. However, in Okushiga Kogen, skiers and boarders are allowed to venture of piste and it’s well worth doing so. Check out the video of Australian snowboard wunderkind Scotty James getting amongst it in some of Okushiga’s trees below if you don’t believe me…

The other part of Shiga Kogen worth checking out is the Yakebitaiyama ski resort – whose trail map was featured above – just next to Okushiga on the north side of Shiga Kogen. Yakebitaiyama is amongst the largest ski areas within Shiga, famous for its role in the Olympics, so you also know it offers some of the steeper pitches around. Whilst Hakuba may have unseated Shiga a few years ago to become Japan’s biggest resort, it’s unlikely Shiga’s title as Japan’s highest will be stripped from it anytime soon. Topping out at an impressive 2,307m – Australia’s Mt Kosciuszko peaks at 2,228m – and coupled with the fact Shiga receives an average of around 12m of snow per season, it is unsurprising the resort gets some of the best conditions in the region and boasts one of the longest ski seasons in Japan – and by extension the world. Other Nagano resorts are not quite so fortunate, at 1831m, Hakuba’s peak is significantly lower and Nozawa Onsen even more so at just 1650m – only 300m taller than the base of Shiga Kogen!

Shiga Kogen is located in the town of Yamanouchi in the Joshinetsu National Park in the Nagano Prefecture – about 50km northeast of Nagano City and 250km northwest of Tokyo. The town of Yudanaka (and the adjacent Shibu Onsen) sits at the base of the mountain, with a 14km windy road that leads up to Sun Valley, the first of the Shiga ski areas. It’s possible to get an airport transfer bus from Tokyo Haneda or Narita Airport to your Shiga Kogen accommodation. Or from Tokyo, take a 90-minute bullet train to Nagano, and then a direct bus to Shiga Kogen which takes about 70 minutes.

No doubt by now you’ve realised Shiga Kogen is a huge resort – one that stretches almost 20 km from end to end. Therefore, the resort has no real town centre and is instead made up of individual, albeit interconnected ski areas, each with its own little clump of hotels and restaurants

We recommend the Shiga Kogen Prince Hotel, at the base of Yakebitaiyama Ski Resort, which is ideally situated beneath some of the best resorts Shiga offers identified above. There are 3 Shiga Kogen Prince Hotels, the East, South and West building and all are considered to be ski-in and ski-out with spacious and comfortable rooms. The East Building offers the most luxurious rooms; chandelier-lit dining overlooking the ski slopes and a sports bar. The South Building provides the convenience of boarding a gondola directly from the hotel. The West Building features reasonably priced rooms, casual buffet-dining, and outdoor Japanese baths, which are only open to guests staying at the West Building.

One of the benefits of a Shiga Kogen ski holiday is that in addition to the skiing and snowboarding, the region offers various off-slope activities. Shiga Kogen is the closest resort to the world famous Jigokudani Yaen Koen (otherwise known as the ‘Snow Monkey Park’). As the name suggests, the park is home to an iconic troop of over 200 Japanese Macaques (‘snow monkeys’). Created in 1964, the park was established as a conservation area in which the monkeys would have a refuge within what was already their natural habitat. You’ll see them bathe in the hot springs and generally not have a care in the world – and who could blame them! Many of Shiga Kogen’s hotels offer a shuttle service to the park, which will then require you take a 1.6km off-rode hike up to the Onsens themselves.

The Shiga Kogen area also has plenty of Onsens for humans, whilst the Zenkoji temple and Matsushiro Kaizu castle in nearby Nagano also make for culturally interesting day trips.  In case you weren’t convinced, check out the mountain stats below and note a single day lift ticket is only 5,000yen and a three-day lift pass just 13,400yen… around $60 and $160 respectively. Not only will this lift pass enable free use of the resort’s shuttle service, But It’s also around half that of a major Australian resort’s lift ticket and less than other major Japanese resorts!