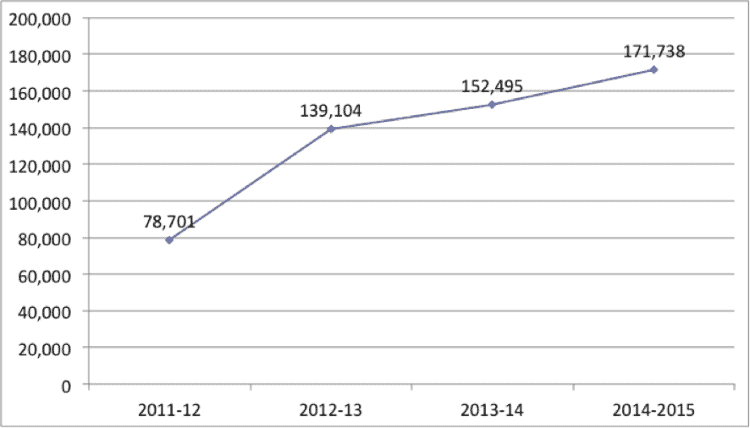 In February I visited {{cta(‘f39bc665-1da5-4eba-b0bc-87e0e91b8b17’)}}, the centre venue of the Nagano Olympic Games 1998. As my family has a cabin there, I have visited the one of the largest snow resorts in Japan for more than 20 years. I knew there were lots of foreign people in winter, majority of them are Australian, but the most surprising thing this time was that I found a restaurant run by a Japanese owner with only English menus. He told me we were the only Japanese in two weeks.

Along with {{cta(’34bc2dcb-8686-467b-a4e0-4aeb48bb9cbb’)}}, Hokkaido, the most favourite snow resort in Japan, Hakuba apparently has gotten popularity among foreign skiers especially from Western countries as well as from Australia. Although there is no accurate statistics from the municipality, the attracted record number of stays of foreign skiers in Hakuba has been increasing and about to reach 200 thousand this season.

# of stays of foreign skiers in Hakuba, Nagano

*Estimated by the number of stays during 12/1~3/31, data from Hakuba Tourism

The lack of snow in the European countries and the U.S. in recent years is a reason for the skiers there to decide to fly to Japan, and the increase of Australian skiers should be partly explained by the fact that the country is in the southern hemisphere, but they are not enough as nearly three times more skiers visited to Nagano prefecture in 2013 than in 2000, and still two thirds of outbound skiers from Australia fly to the resorts in the West. (Source: Nagano Tourism Statistics) Clearly, there are some reasons that make Hakuba attractive to foreign skiers and the mountains get huge attention in abroad in this couple of years. I divided the factors into two kinds; environmental transformation in the ski industry and recent visits by famous riders.

This factor is nothing new for marketing and digital professionals but the penetration of digital media including SNSs, smart phone and Wearable Cameras like Go Pro is one of the obvious reasons why the mountains in Hakuba has become popular so quickly. Not only do famous production boutiques such as RedBull Media House, MSP and Sweegrass productions, and outdoor equipment brands, but also now everyone can produce attractive digital contents, photos and movies, and publish them throughout the world. The edgy contents, therefore, whoever produced can be exposed to the world overnight.

In addition to the changes in the media environment, the changes in the preference of skiers and in the popularity of recreational activities in general affect the increase of foreign skiers in Hakuba significantly. Ski is generally an activity for people in developed countries, which are ageing. The higher the average ages of the skiers, the more they prefer mild and healthy recreational activities like ski mountaineering, powder skiing, and backcountry skiing than alpine racing and freestyle skiing.

% of people over 65 years old in population

Rapid development of equipment for alpine touring has boosted the trend even more. In the U.S., five times more units of alpine touring (AT) ski boots were sold in 2013-2014 season than in 2010-2011, the sales in the split snowboards became 2.6 times during the same period, and the overall sales of DYNAFIT, “a brand for dedicated mountain athletes” from its mission statement, became 20 times between 2003 and 2015. (Source: SIA, DYNAFIT) Now backcountry and ski touring are the most important areas for every brand.

The changes in the people’s preference for recreational activities are also reflected in the increasing popularities of endurance sports such as triathlon, marathon, ski mountaineering and cycling. Tokyo marathon 2015 received 10 times more applications than the fixed number and the number of applications of Patrouille des Glaciers, a ski mountaineering race organized by Swiss Army, recently exceeds the capacity, 3000 participants, although it only accepts the applications from experienced ski mountaineers.

The visits of famous riders to Hakuba triggered the popularity of the place making it comparable to Hokkaido including Niseko in the aspect of the number of the visits from foreign countries. Probably the first one with a huge impact to Hakuba was Jeremy Jones, one of the most iconic snowboarders, who visited there in 2011 when he took “Further”, the second edition that recorded his series of exploration.

The “Alaska type of faces” as he mentioned during the interview in the movie stimulated his instinct as an explorer and the movie opened up the eyes of his followers changing their notion that Japan had thick powder but without steep terrains. Hakuba surrounded by the Japan Alps has thick quality powder as early as at the beginning of January even at the altitude below 2000m like the other Japanese snow resorts, but severe terrains and features all within the distance of 30 min by car from the resort area makes it stand out from others, which were really attractive to progressive skiers.

Xavier de le Rue, 2010 Big Mountain Rider of the Year by SNOW BOARDER, visited Hakuba in 2011, Travis Rice did in 2014, Anna Segal, 2013 X Games Slope Style champion did in 2015. These are only among a few who enjoyed “Japow” (Japan + Powder) in Hakuba and showed the exploration to their followers through the web.

Hakuba has a huge potential as a mountain resort considering the quality of mountain and accessibility from the airports in Tokyo. The problem here is that the locals don’t yet recognise their unique strength as a tourist destination and don’t figure out the way to utilise the asset. Some smart people have begun to consider how to differentiate the beautiful mountain village from other destinations in all over the Asia. The next 10 years should decide the future of it. And because it is at the centre of the Japan Alps the solution could affect the mountain tourism in Japan, which could even affect the whole tourism industry as mountains cover the 70% of the land.

Want to Explore this Winter Wonderland by Yourself?