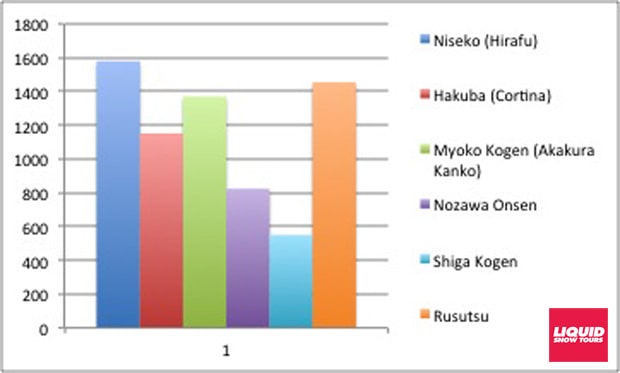 Photo Gallery and Snowfall Comparison for 2012/13

Another cracking season full of beautiful Japow was had by all in 2012/13, although as always, some got more than others. As per usual Niseko received the most snow out of the major resorts, just ahead of Rusutsu and Myoko Kogen. This is certainly no surprise however we are shocked to see Shiga Kogen so low! These figures are usually measured in the vilages, which means the top of the resorts receives much more.

Don’t use these figures alone when picking a ski resort though – a number of other weather factors will impact on which resort you will enjoy most. As you can see here Niseko receives the most snow, and it also receives the lightest and driest snow, i.e. the best snow to ski on. However the caveat is that there are always more bad weather and down days in Niseko than say Hakuba or Nozawa Onsen where you can expect a few more bluebird days. Also Niseko is much colder than its Honshu rivals due to its latitude.

Want a quote for any of these resorts? We have got accommodation packages to suit any type of holiday, including some brand new ‘Add on’ packages, which are 3 night holidays in the smaller resorts such as Nozawa Onsen or Myoko Kogen after a 7 night holiday in Hakuba. By staying mid week you can save significantly and we have negotiated on your behalf to get the rates even lower

All figures are in centimetres and represent cumulative snowfall for the 2012/13 season, stats gathered from snowjapan.com

If 2012/13 was a great year for snowfall in Japan then it was a fantastic year for tourism for the island nation’s ski resorts. The typical Aussie contingent was well represented, however an increasing number of Europeans and North Americans joined the fun last year. This is obviously great for the locals of the resorts as more money and jobs flow to the areas and it means the holiday experience will only get better and better. We managed to get a selection of great snaps from those on holiday so please take a look below or in our photo gallery to see a bigger selection